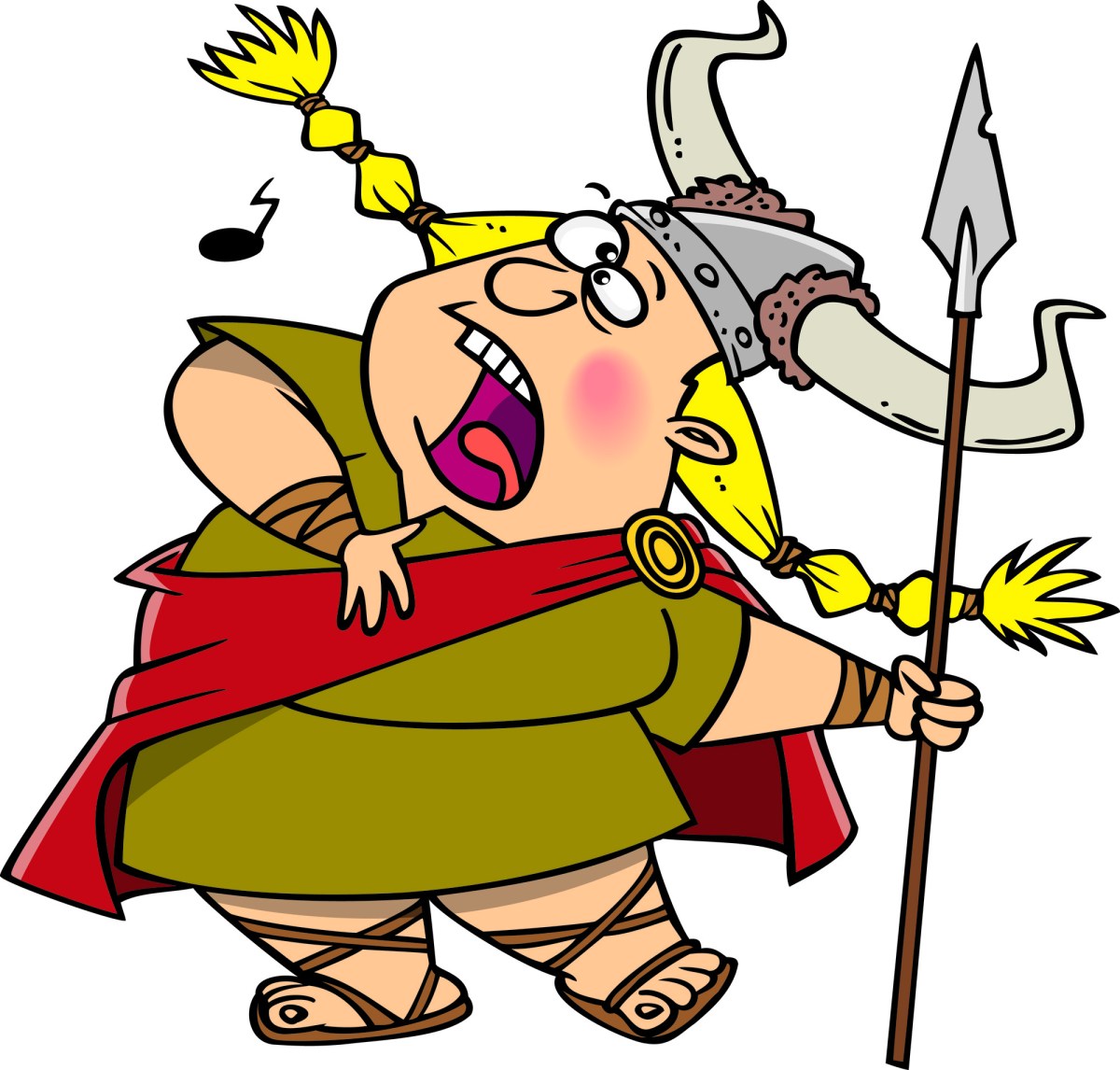 THE FAT LADY’S NOT SINGING YET!

It’s one of those phrases you can’t forget,  “…the opera ain’t over until fat lady sings”.  I’m not much of an opera fan, but I think I can safely assume what that means. For whatever reason, many opera sopranos tend to be a bit overweight!   Who am I to talk!!  At the end of many operas there is a climatic aria featuring the talents of the robust soprano.  The phrase we’ve heard seems to just be an observation from actual events.

This saying took on a life of its’ own in 1976 when the Texas Tech Sports Information Director Ralph Carpenter used it after his Red Raiders team made an improbable comeback to tie a game at 72-72 in the Southwest Conference Tournament finals. The entire media booth was sent into an uproar!  Since then this iconic phrase has become associated with many improbable finishes in sports and other events.  It means that one should not presume to know the outcome of an event which is still in progress.

There have been a number of similar sentiments expressed through the years.  One of my father’s favorites was “Don’t count your chickens before they hatch”, a well-known saying which originated in the 16th century.  Yogi Berra, the famous NY Yankee catcher and later manager, popularized the phrase, “It ain’t over till it’s over“.   And there’s always the classic,  “The future isn’t carved in stone“, a phrase meaning that the future can always be changed.

All of these catchphrases suggest we don’t always know what the ultimate outcome is going to be.  Life has a way of sending us a few surprises, both good and bad.  We can prepare ourselves as best as we can for every possible outcome, but the reality is “it ain’t over until the fat lady sings”.  That should be motivation for us to continue to give it our best effort, whether things are cruising along just as we planned or we find ourselves seemingly stuck on the short end of the stick.

It’s not hard to find motivational stories that illustrate this truth. There are countless accounts of unbelievable comebacks and improbable finishes in sports.  Perhaps you can remember the story of Reggie Miller scoring 8 points for the Indiana Pacers in the last 16 seconds to turn a 6 point deficit into an amazing victory. The Boston Red Sox were behind 3 game to none in the 2004 ALCS, and down to their final 3 outs in Game 4  or face being swept by the NY Yankees. They rallied to win that game and then next 3 in unbelievable fashion.  No team had ever come back from a 3-0 deficit to win a series in baseball. But even that pales to the feat that the Oracle Sailing team accomplished in 2013 in the World Cup, coming from a 7-1 deficit in to win 7 races in a row and be crowned World Champion.

And that “fat lady” doesn’t just sing at operas or sporting events!  There are some amazing stories from the political sphere too!  In 1948 the newspapers around the country carried the headline, “Dewey Defeats Truman”……then had to retract those stories the next morning! In 2000 the story of the “hanging chads” in Florida captured the world’s attention waiting for the decision by the US Supreme Court that declared George Bush had won the presidential election.  The “fat lady” had to wait more than a month after the November election day to start singing that time!

There are many stories of love affairs that are interrupted by outside events that seemed to squash the opportunity for love to flourish, only to be rekindled when circumstances changed.   Shakespeare wrote about that in his famous “Romeo and Juliet”, and more recently the movie “The Notebook” carried a similar theme.   Star-crossed lovers may be split by time, space, and circumstances, but love finds a way to bring them back together.  You’ve got to love the “fat lady” in those circumstances.

Recently I’ve been teaching a class on the book of Revelation.  The book was written to a group of first century Christians living in Asia Minor.  The Roman Emperor at the time,  Domitian, had taken offense at the Christian faith and was actively pursuing systematic persecution of the Church.  Things were bad now and, unfortunately, they would be getting worse based on the vision John shared with his readers.  But there was a much larger battle going on than the one between the Romans and the Christians.  The powers of good and evil were engaged in a cataclysmic struggle that will ultimately continue until the end of time. John shared the bad news by unveiling a series of events marked by 7 seals, 7 trumpets and 7 bowls of God’s wrath, and a wide variety of apocalyptic symbolic beasts and cosmic events. No matter how you interpret John’s letter, it’s filled with a lot of “bad news” that could leave the reader discouraged about the future.

Fortunately, John evidently saw something strangely reminiscent to our “fat lady” singing.   As bad as things looked, there was an ending to the story that would turn everything around.  The devil and his minions may win a few battles along the way, but Christ would win the war.  As powerful as the Roman Empire was, it was destined to fall.  Satan would use such instruments of evil in his ongoing struggle against God and the angelic armies, but his outcome was already secured.   The “fat lady” may not be singing yet, but even Satan knows she’s warming up.

So much of our lives seems to be dominated by bad news these days.   The fact is many people have somewhat given into the gloom and doom.  They see the circumstances around them and have the sense that things are bad now and are only going to get worse. They have almost resigned themselves to a “new normal” that has little hope for a better future.  I can’t say I don’t understand their feelings, but I respectfully disagree.   Like those early Christians John wrote to in Revelation, we may be in for some tough times ahead, but we need to hold on to the hope for the future that is still firmly under the control of our loving and gracious heavenly Father.  John repeatedly showed his readers glimpses of the throne room of heaven to build their anticipation for the actual end of the story!   And when that day comes not only will that proverbial “fat lady” finally be singing, but she’ll be joined by millions proclaiming “Holy, Holy, Holy is the Lord God Almighty.”   That’s going to be worth the journey!

I wish I could say that things are going to get better in the near future.  The reality is, I can’t really say that because I simply don’t know.  No one does, no matter what any political ad may claim.   No one predicted that 2020 would be the year of Covid-19, but it came!   The landscape we live in changes rapidly, sometimes even daily, as new circumstances become a part of our life journey.  No amount of “wishing things would get better” will ultimately change anything.  Instead, we have to walk one day at a time with all the knowledge and wisdom we can gather, put our best foot forward, and trust God for the ultimate outcome.  We may feel like we’re down and out, with little hope for a successful end to the story, but I sense we are often just too quick to throw in the towel of hope.

Perhaps you need to be reminded today that “it ain’t over until the fat lady sings”.   I don’t know what’s going on in your life, what your circumstances may be, or how bad things may appear.  But I know as long as we’re taking in breath and ready to walk the next step that things can change.  There may be things we can do that we haven’t considered yet. There may be intervention from an unknown source that will help us through the maze of life.  Perhaps God will provide a miracle beyond our comprehension to turn the tables around.  Or, just maybe, He’ll take us home to be with Him to wait for the climax of history from seats in the front row.  In either case,  we need to remember…..until God says so,  IT AIN’T OVER!   We still have time to make a difference.   Let’s not waste the opportunities He’s given us.

Who knows what we may still be able to achieve and experience before that       “fat lady” sings!