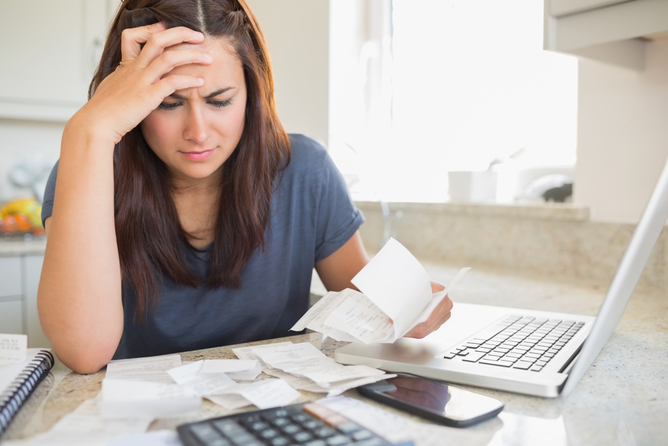 IT ONLY HURTS WHEN I PAY THE BILLS

Just when it seemed all the pieces were coming together the storm hit.   It wasn’t one of those passing sprinkles…..it was a good old fashioned downpour that completed altered the course of our lives.   It would take several months to recover from this latest insult to our tranquility…….and it wouldn’t be the last time we would have to deal with the stress and discomfort that always accompany dealing with the aftermath of a financial thunderstorm.

I had just been discharged from the Air Force.  My wife had given birth to our second son  just 3 days before my discharge date.  It was a hectic few days, with the movers packing up our house while my wife was in labor.  But now with our toddler and newborn in tow, we left San Antonio and began the long trek back to the West Coast.  The Mayflower truck was taking our household possessions to storage in Oregon, where I was scheduled for a couple of job interviews later that month.  Our intent was to settle in the Northwest somewhere after a short visit with my wife’s parents in Southern California, and then with my parents in Nevada.  So much for good intentions.

If you’ve never driven with a newborn and a 18 month toddler across country,  you may not appreciate how long the trip was from San Antonio to Southern California.  Needless to say, by the time we arrived my wife and I were extremely happy that Grandma and Grandpa were there to dote over the grandkids so we could get some rest and start readjusting to “civilian” life.

After a very nice visited we packed up the car and began heading north, with a planned stop at my parent’s in Reno, where they had recently moved to manage a Motel 6.   Those of you who have driven into or out of Southern California know that the most traveled route takes you on I-5 over the Grapevine.  This 6-8 lane highway is short and steep heading north to south, but a long, uphill climb heading south to north.  It’s a notorious stretch of road that sees more than its share of cars breaking down from the strain of the climb.  It’s not unusual to see multiple cars on the side of the road dealing with an overheated radiator……even with water stops located all along the way.

Being from the Northwest but having gone to college in San Diego, and now being married to a girl from Orange County,  I had driven over the Grapevine on a number of occasions so I wasn’t worried…..even with the car fully packed and pulling a small trailer. Unfortunately, my confidence was overstated, as I would soon find out.

It was a warm day as we began the climb over the hill.  Our 8 cylinder Oldsmobile didn’t seem to strain under the load, even with the air conditioning on full blast.  However, about half way up the hill I began to get a warning light that the car was overheating.  I decided to drive to the next water stop, which was just a couple miles up the road.  By the time I reached it we were at a full boil.  All we could do was open the hood, let the car cool down, and then try to refill the radiator.

Needless to say, the long wait in a hot car with a two week old and an 18 month old was not a particularly enjoyable experience for anyone.  When we finally got back under way we were all relieved and hoped we could make it to the summit, just 12 miles away in the small town of Gorman.

Unfortunately, after just 5 miles the car started to heat up again.  We had just passed a sign that said Gorman was 7 miles up the road, and there were no more water stops.  Therefore, seeing how uncomfortable my wife and kids were, I decided to keep driving and try to make it to the top.  It was the wrong decision.

By the time we were two miles out we had some steam rising from the hood.  We put the heater on full blast and began to ask God to just get us to the top.  Within the next half mile the car began to sputter a bit, but it wasn’t bad.  One mile out things got a bit bumpier and we had to slow down.  A half mile out we had lost a significant amount of power and we knew we were in trouble.  And by the time we rolled into the gas station at the exit billows of steam were escaping the engine and we could barely move.  There was nothing we could do but wait to talk to the mechanic across the street to see what he thought.  Swamped with work already, he informed us he wouldn’t be able to look at it until the next morning.

We checked into the cheap hotel nearby and spent a restless night wondering what we were going to do.   We didn’t have the finances for a major car repair or to pay for an extended stay in a motel.

Late in the morning the next day we found out the thermostat had stuck, which caused the engine to overheat. As a result, when we drove those last 7 miles we had blown our head gaskets, amongst other things.  The estimated repair bill was outrageous and it would take several days to get the parts.

Left with no other options, we agreed to the repairs, then called my wife’s folks back Orange County to come pick us up so we could stay with them while our car was being repaired.   A week later, using everything we had and borrowing some money from my wife’s folks to at least get to Reno, we headed back up to Gorman to pick up the car and our trailer so we could head north again.

Fortunately my parents were able to put us up in a room at their Motel 6 for a couple of weeks upon our arrival. Having missed a number of interviews for  jobs in Oregon, I had to find temporary employment in the local area. My wife began filling in at the front desk of the motel for a few extra bucks after I got home from work each day to watch the kids.  We were flat broke and wondering how in the world we were going to move forward, especially with unpaid bills beginning to pile up.  Our circumstances had thrown us into a financial disaster that would take months to recover from and altered the very course of our lives.

Have you been there?   I’m assuming we’ve all gone through such financial storms at one time or another. This was one of the first in our marriage, but certainly not the last. In the future there would be unexpected medical bills, a period of unemployment, an automobile crash or two,  a small fire in our house, expensive vet bills,  college and seminary tuition, etc……and of course, more car repairs!   It sometimes seemed like an endless cycle of our hard earned money going down a drain.  Just about the time we thought we were  going to get caught up, something else happened.

As I look back upon all those financial storms something very significant stands out…..God always provided!  When things looked the most impossible, somehow the resources were there. The Publisher’s Clearing House didn’t come to my door nor did Bill Gates send me a check.  But the bills got paid, there were groceries in the house, the lights stayed on, and we always managed to get from place “A” to place “B”.

There were stressful, even worrisome moments to be sure.  But God’s provision through the worst of times was also “for sure”.  Even now I’m not certain I can explain how it all came together, but it always did.  Our married life has been a testimony to God truly being Jehovah-Jireh – “our provider”.

Philippians 4:19 says, “And my God will supply all your needs according to His riches in glory in Christ Jesus.”

In those lean times we can all take comfort in verses like Matthew 6:26, “Look at the birds of the air. They do not sow nor reap, nor gather into barns, and yet your heavenly Father feeds them. Are you not worth more than they?”

In case you were wondering, the answer is “YES”!

I get it….financial issues are a part of life.  Perhaps you’ve had some of those times when “it hurts to pay the bills”.  Rest assured you are not alone.  In fact, almost everyone around you understands. But more importantly, God understands and He has the resources at His disposal to meet your need.

Financial storms come in all sizes, from a minor inconvenience to a life-changing event.  Whatever we face our primary task is to be a faithful steward of the limited resources God has placed at our disposal, and then leave the rest to Him because His resources are “unlimited”.

I don’t know how He’ll provide for your need or change your plans…..but if you find yourself detoured in a place like Gorman, just hold on, do the best you can, and then watch how He’ll lead you through the chaos.  I guarantee someday you’ll look back and be truly amazed!!